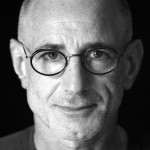 In 1978 began professional photography career in the Pirogov Institute, as well as working for various newspapers and magazines.

From 1989 – working for Bulgarian entertainment and documentary productions, as well as French and Italian film productions.